A look of HITHOC in two programs in Germany, Freiburg and Regensburg

While there are a reported 17 centers in Germany performing the HITHOC procedure, this, dear readers, is the tale of two cities.

Over the years, finding information and making contact with surgeons performing the HITHOC procedure has been a long, expensive and time-consuming affair.  Emails, interview requests and research questions frequently go unanswered.  Expensive trips abroad for in-person interviews  sometimes end up with all-too-brief meetings with disappointing results.  But illuminating, and informative interviews and in-depth discussions about HITHOC are worth the inconvenience.

After the publication of a brief English language abstract for a larger article in German that hinted at research outcomes for multiple facilities, thoracics.org reached out several times to the authors (Ried et al, 2018) for further comment.

Back in 2011, Dr. Ried and his colleague, Dr. Hofmann at the University Medical Center in Regensburg, Germany, briefly discussed their HITHOC program, which was started in 2008.

Now, thoracics.org is in Germany to talk with Dr. Hofmann as well as another thoracic surgeon at a different facility in southwestern Germany.

Our journey starts just a few hours south of Frankfurt, in the picturesque city of Freiburg im Breisgau, in the Black Forest region of Germany best known for Cuckoo clocks, the Brothers Grimm fairy tales chocolate cake, and thermal spas.  Freiburg is the largest city in this region.  It’s a charming locale with a history that extends back to medieval times despite Allied bombing in a more recent century.

Frieburg is also home to a University Hospital and the Robert Koch clinic of thoracic surgery.  Dr. Bernward Passlick is the Director and head surgeon of this department. 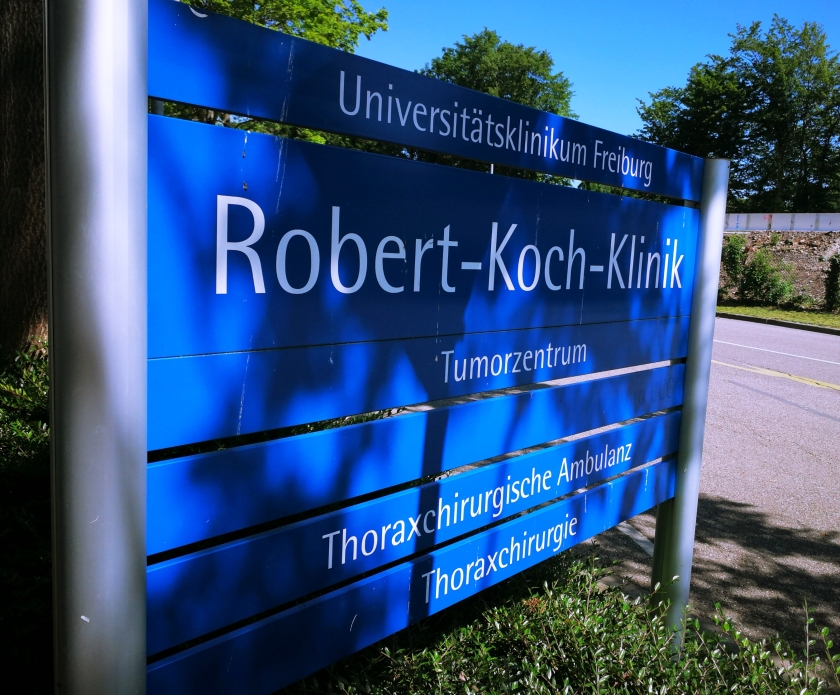 Dr. Passlick is the reason thoracics.org has come to this charming but sleepy college town.  After several months of written correspondence, thoracics.org arrived in Freiburg to here more about the HITHOC program from Dr. Passlick himself.

However, from the first initial comments from the department secretary who lamented that the length of HITHOC cases was “a waste of operating room time” [because multiple other cases could be done in the time it takes to perform one HITHOC case], to the actual meeting with Dr. Passlick, nothing proceeded as expected.  Dr. Passlick was uninterested, and unwilling to discuss HITHOC.  He reported that he did approximately 15 cases a year, retains no outcomes data and has no interest in publishing any results from these cases.  However, despite the apparent lack of any documentation or statistics on HITHOC cases performed at the facility in Freiburg, he states that the ‘average’ survival is 2 to 3 years with some long-term survivors at six years or more, post-procedure.  [When asked when he had no interest in publishing data showing six year survival, Dr. Passlick had no answer.  We sat in silence for a few minutes, until I thanked him for his time and left.]

He briefly mentioned that his real interest lay in the area of treating multiple pulmonary metastasis using laser assisted resection via open thoracotomy.  The laser resection technique allows for greater lung sparing in patients with multiple (and presumably, bilateral) pulmonary metastases from other primary cancers such as advanced colon, renal or breast cancer.  He uses this technique for patients with five or more pulmonary metastasis, and reports he has operated on patients with as many as 20 to 25 metastatic pulmonary lesions.  He didn’t have any statistics on this procedure to share, but did offer that he has a paper scheduled for publication soon.  So, a bit disheartened, and thus unenlightened, it was time to leave Freiburg.

Leaving the Black Forest, we head east – into Bavaria with miles of rolling hills dotted with windmills, vineyards and solar panels, past Munich and then north into the area where the Danube, the Naab and the Regen rivers meet. This is Regensburg, a city that was founded by the Celts.  The Romans later built a fort here in 90 CE.  The remains of a later Roman fort are readily seen in the historic city center.

But as charming as the city of Regensburg is, we aren’t here for sightseeing.   Our next stop is another HITHOC program.  It’s not the biggest in Germany, not by far, but it is a very well established program that is grounded in evidence-based practice, protocols and on-going scientific inquiry and research.

We are here to interview Dr. Hans – Stefan Hofmann, the head of the thoracic surgery department at both the University hospital and the large, private Catholic hospital in town.  Dr. Hofmann along with his colleague, Dr. Michael Reid.

Re-assuredly, the interviews were more familiar territory.  Dr. Hofmann was very friendly, and forth-coming.  Dr. Hofmann reports that their HITHOC volumes are fairly small, and attributes this to plateauing rates of pleural mesothelioma.  (The majority of the HITHOC cases were initially performed for pleural mesothelioma, but there have been an increasing number of cases treating advanced thymomas (stage IV) with HITHOC as well as limited cases of pleural carcinosis.

In some of these thymoma cases, the patient undergoes a staged procedure, with mediastinal exploration performed as the first step.  In some cases, the Regensburg facility receives patients after they have undergo mediastinal lymph node dissection at another facility.

His program has been performing HITHOC for over ten years, using a combination of cisplatin and doxirubin with a cycle time of 60 minutes.  He reports a low rate of complications and points to the multiple publications by his colleague, Dr. Reid for outcome data.  Dr. Reid has another couple of articles in press including another paper, that explains their renal protection protocol, [in addition to Reid’s earlier work in 2013, listed below].

Of course, the visit wouldn’t be complete without a trip to the operating room.  While it wasn’t a HITHOC case, Dr. Hofmann was performing a robotic -assisted thoracoscopic surgery on a patient requiring lung resection for adenocarcinoma.  As the patient was already medicated when I entered the operating room – there are no operating room photos.   The case proceeded quickly, efficiently with no intra-operative complications and minimal EBL.

As some of our long time readers know, thoracics.org no longer just reports on news and events in thoracic surgery.  After multiple requests from our readers, we now facilitate specialty treatment too.

We won’t talk about that a lot here – it’s not the right forum, but for readers who would like more information about Dr. Hofmann, or are interested in surgery with Dr. Hofmann (or Dr. Gonzalez Rivas, Dr. Sihoe or any of the other modern Masters of thoracic surgery), we  are happy to assist you.  Contact me at kristin@americanphysiciansnetwork.org

Both surgeons are widely published on multiple thoracic surgery topics.  This is a limited selection of citations related to HITHOC.