Thoracics.org follows up with Dr. Marcello Migliore from the University of Catania, on his work in the area of HITHOC and malignant pleural mesothelioma 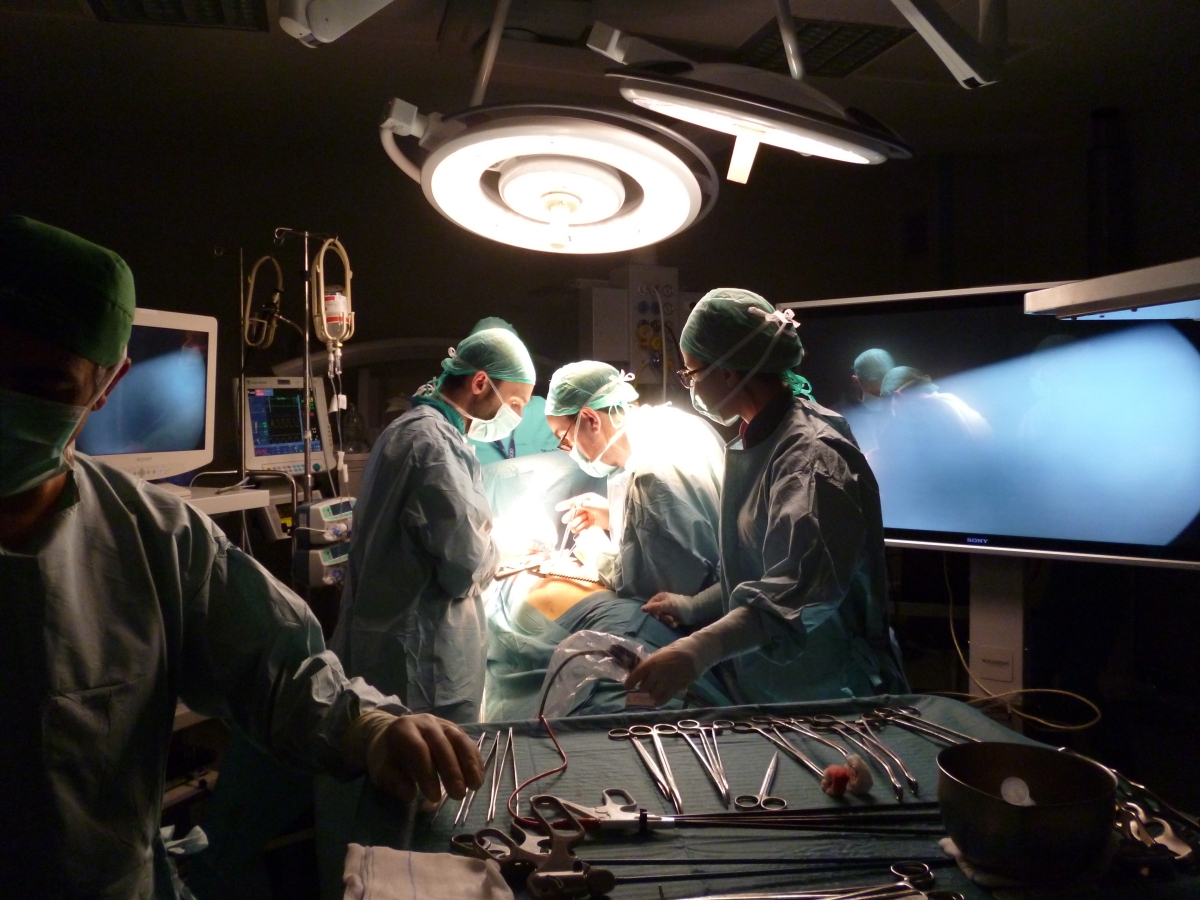 As discussed in a previous post on HITHOC and Mesothelioma, Dr. Marcello Migliore and his colleagues in Catania, Italy have published results from a small pilot study on the use of HITHOC (cytoreductive surgery and intrathoracic chemotherapy) to treat malignant pleural mesothelioma.

Thoracics.org contacted Dr. Migliore to find out more about that study as well as his on-going research in this area. He was also kind enough to offer his opinions on Hope and the diagnosis of malignant mesothelioma.

Thoracics.org: Dr. Migliore, woud you tell us more about your current research on HITHOC and mesothelioma?

Dr. Migliore: We are conduction a pilot study to compare pleurodesis with talc vs HITHOC in mesothelioma patients. Goals are quality of life and survival.

Thoracics.org: How many more patients are you hoping to enroll ?

Dr. Migliore: we hope to enroll at least 12 patients (unfortunately in almost 2 years we enrolled only 6 patients)

Thoracics.org:  Would you tell us more about eligibility criteria?

Dr. Migliore:  All patients with mesothelioma will enter the study protocol except those who cannot undergo surgery for poor performance status.

Thoracics.org:  Would you describe the procedures for our readers?

Dr. Migliore: Talc pleurodesis is performed using the uniportal VATS technique (2 cm skin incision), which is a concept that was introduced  by us already in 1998 (and published in 2001 and 2003).  As you know,  Gonzalez- Rivas  is now well known worldwide for using  the concept of uniportal technique to perform major lung resection. Pleuerectomy and decortication with HITHOC is  performed using the bi-portal VATS technique but with an skin incision of around 8 cm.

Thoracics.org:  In your preliminary paper on your last pilot study, there were a couple patients with lung cancer who were included in the HITHOC trials.  Is that the same for your current study?

Dr. Migliore:  While I feel that some patients with lung cancer could have benefited from HITHOC, for this study, the indications must be strictly limited [to patients with malignant mesothelioma only].

Dr. Migliore: Yes, due to the development of adhesions between parietal pleura and  the chest wall, as well as between the parietal and the visceral pleura, which are really difficult to remove.  It requires delicate work using the fingers ( at the end of the operation you can have pain in fingers and fingertips!)

Thoracics.org: Does it lead to increased operating room time, or increased bleeding from adhesions?

Dr. Migliore:  While is certainly increases operating time but there is no evidence of increased bleeding but air leaks are more frequent. Intraoperatively, it is imperative to put attention to every single detail to avoid postoperative complications.

Thoracics.org: Do you find that patients with diaphragm involvement develop more post-operative complications or are more likely to develop disseminated disease ?

Dr. Migliore: That has not occurred in this group of patients but the number of patients is small, and therefore it is impossible to answer.

Thoracics.org: What has been the biggest obstacle in your research?

Dr. Migliore: Certainly living in a “rural” region with cultural dogmas and financial restriction for research are probably the most common obstacles to speedy clinical surgical research.

[During a related study] “We operated two patients and one is alive after 3 years. She was 40 y.o. lady with a 15 year-old child. She had malignant pleural effusion with a peripheral lung tumor and was treated elsewhere with talc pleurodesis alone, and 6 months survival was given. We performed a parietal and visceral pleurectomy with HITHOC. She is alive (with recurrence) and her son is now 18 yo. This simple case give an explanation that an operation although “experimental, gives hope (we should not give false hope) and permits to these unfortunate patients to see light in the dark”.

Editor’s note:  Some minor edits have been made for the sake of formatting.  Thank you to Dr. Migliore and his team.

The actual title of the article by Ahmet Feridun Isik and his colleagues at Ganziantep University Medical School in Sejitkamil – Ganziantep, Turkey is “Intrapleural hyperthermic perfusion chemotherapy in subjects with metastatic pleural malignancies.”

As we’ve discussed in previous posts, malignant pleural effusions (MPE) are a devastating diagnosis with an exceedingly poor prognosis.  As stated by the authors, “currently palliative therapy with pleurodesis or pleurectomy / decortication is the treatment of choice in secondary MPEs. Other treatment approaches are chemotherapy and/or radiotherapy.   Unfortunately, none of these approaches provides a significant benefit for survival.”

Length of survival following the development of MPE is related to the underlying primary cancer, and primary lung cancer has the shortest survival.  However, preliminary results of other studies looking at HITHOC have shown promising results.  This is what led Isik and his team to further study the use HITHOC in malignant pleural effusion.  With their permission, and gracious assistance, we have presented information on their study here.

HITHOC or HIPEC is the administration of heated chemotherapy directly to the tissue surfaces.  Scientists believe that the addition of heat, as part of a direct application of a chemotherapeutic solution enhances the cancer-cell killing effects of the agent itself while localizing these effects to the affected body cavity.  (Versus systemic chemotherapy through an IV -into the bloodstream where the chemotherapy has direct effects on other organs like the brain).  While chemotherapy is still absorbed into the system with systemic effects, this is believed to be less than with traditional chemotherapy.

When: Study started in January of 2009 – December 2011 (for data compiled and used for publication).  Protocol is currently on-going.

Who:  Cancer patients with a node status of 1N or less with (pleural) biopsy/ cytology proven metastatic malignancies.  Patients required to have good functional status, and no distant metastases (outside of pleura) at time of inclusion in study.

How many :  19 patients for the HITHOC treatment group original research,  (11 more since paper submission in July 2012 – with a total of 28 patients receiving treatment using the protocol discussed in the study as of June 2013.)  The original group included 14 males, 5 females.

What was the treatment:

The HITHOC process:  The patients’ heads were packed with ice to prevent damage to the brain due to hyperthermia.  Normal saline was heated to 42 degrees centigrade, then infused/ circulated through pleural space via the chest tubes (ie. intrapleural infusion) for one hour (using approximately 1.2 – 3.2 liters of saline solution.)  After the saline infusion, patients received an intrapleural infusion of 300mg /m2 of cisplatin for one hour.  Patients received IV hydration for 24 hours after the procedure to prevent nephrotoxicity.  Patients also received FFP.

Notably, despite the morbidity and mortality of similar procedures, such as HIPEC of the abdominal cavity, none of the HITHOC group patients died intra-operatively.

Group 2: Talc pleurodesis – 4.5 gram talc slurry administered thru a small bore chest tube.  Since this treatment is essentially palliative in nature only (to prevent re-accumulation of effusion), we would expect this group to do the worst.

Group 3: Pleurectomy / Decortication by VATS, with excision of all apical and basal parts of parietal pleura except mediastinal and diaphragmatic sides.  Performed with patient under general anesthesia.  This is the current surgical treatment for this condition.

All patients in all groups received cisplatin- based systemic chemotherapy based on primary cancer.

Results:  Survival at one year (12 months)

Group 1: (HITHOC with P/D) – 57.4 %  Two patients in this group needed re-operation for additional resection due to cancer recurrence ( 1 completion pneumonectomy and 1 wedge resection).

Results since publication – as of June 2013:

10 of the HITHOC patients remain alive to date (6 were primary lung cancers, 4 with other metastatic cancers).

The authors report that the main complication has been  a modest rise in serum creatinine (which may indicate renal impairment/(kidney damage) but that has been remedied with the use of IV hydration.

Update:  In the summer of 2014, thoracics.org traveled to Ganziantep, Turkey to interview Dr. Isik and his colleagues about his research.