a different kind of case here at Cirugia de Torax

On examination, the patient had a palpable, reducible mass over the right carotid, with no bruits on auscultation.

Labs:  All labs within normal limits including a Hgb 16/ Hct 48

After administration of general anesthesia, and endotracheal intubation, the patient was positioned, prepped and draped in sterile fashion.  A 4cm vertical skin incision was made on the right side of the neck.  After blunt dissection and retraction of sternoclastomastoid muscle, the common carotid artery was identified and retracted  with a vessel loop.  Identifying the bifurcation and loosely clamped external and internal carotids.  Care was taken to identify and prevent injury to the hypoglossal nerve and fascial branches.

Extensive ligation of  tributary vessels was undertaken while performing blunt dissection to the avascular plane.  Once the tumor was separated from the carotid bifurcation, it was removed and sent for final pathology. 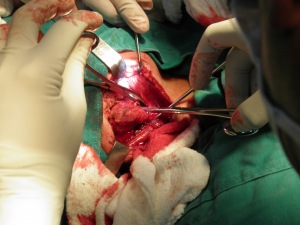 At the conclusion of the case, a small jp drain was placed.  The patient was awakened in the operating room and extubated.  Patient demonstrated no new neurological deficits.

JP drain was discontinued on the morning of POD#2 and the patient was subsequently discharged.  Patient reported no dysphagia, hoarseness or paresthesia.

The carotid body serves as an important function of the detection and moderation of hypoxia.  This has been shown in several studies of post-operative carotid endartectomy patients who are unable to adjust/ acclimatize to increasing altitude as well as the increased incidence of carotid body tumors (CBT) at altitudes of 2000 meters of greater (Ojeda Parades).

Despite the location of these tumors, (at the bifurcation of the common carotid into the external and internal carotid), the chances for successful excision and resection is high with a mortality of less than 1%.  The most common complication of this procedure is damage to the adjacent nerve, causing hoarseness.

Boedecker, C. C. (2011). Paragangliomas and paraganglioma syndromes.  Head and Neck Surgery, 2011 (10).  A nice review article of paragnaglions including paragrangliomas of the head and neck.

Authors conducted a study of 120 CBT in Mexico City, D.F looking at the incidence and characteristics of all CBTs over a thirty year period (1965 – 1995) in comparison to previously published reports of CBT at lower altitude.  Findings similar to previous and existing literature  with a predominantly female population (89% of cases).  Mean age 49.  Mean size 5.4 cm.   They reported a 20% incidence of cranial nerve injury after resection.

Ruben, R. J. (2007).  The history of the glomus tumors nonchromaffin chemodectoma: a glimpse of biomedical Camelot. Acta Oto-Laryngeologica 2007; 127: 411-416.  If you can get past his fanciful writing style which resembles an ardent love letter, the article gives a nice history of paraganglion tumors (including carotid body tumors).