Very pleased that despite the initial difficulties, we are able to provide information regarding the recent conference. 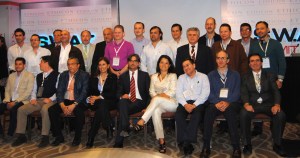 The audience was made up of thirty Latin American surgeons from Colombia, Costa Rica and Venezuela.  This surgeons were hand-picked for this invitation-only event.  Unfortunately, while Johnson and Johnson organized and presented a lovely event; their apparent lack of knowledge about the local (Colombian) thoracic surgery community resulted in the exclusion of several key surgeons including Dr. Mauricio Velasquez, one of Colombia’s earliest adopters of single-port thoracoscopy.  Also excluded were the junior members of the community, including Dr. Castano, Dr. Carlos Carvajal, and current thoracic surgery fellows.  It was an otherwise outstandingand informative event.

However, this oversight represents a lost-opportunity for the parent company of Scanlon surgical instruments, the makers of specialized single port thoracoscopic instrumentation endorsed and designed by Dr. Gonzalez-Rivas himself, including the Gonzalez-Rivas dissector.

As discussed in multiple publications, previous posts as well as during the conference itself, it is these younger members who are more likely to adopt newer surgical techniques versus older, more experienced surgeons.  More seasoned surgeons may be hesitant to change their practices since they are more comfortable and accustomed to open surgical procedures.

Despite their absence, it was an engaging and interesting conference which engendered lively discussion among the surgeons present.

Of course, the highlight of the conference actually occurred the day before, when Dr. Gonzalez- Rivas demonstrated his technique during two separate cases at the National Cancer Institute in Bogotá, Colombia. (Case report).

Dr. Diego Gonzalez – Rivas is a world-renown thoracic surgeon jointly credited (along with Dr. Gaetano Rocco) with the development of single-port thoracoscopic (uni-port) surgery.  He and his colleagues at the Minimally Invasive Surgery Unit in La Coruna, Spain give classes and lectures on this technique internationally.  Recent publications include three papers in July alone detailing the application of this surgical approach, as well as several YouTube videos demonstrating use of this technique for a wide variety of cases.

Dr. Paula Ugalde, a Chilean-borne thoracic surgeon (from Brazil) who gave several presentations on minimally-invasive surgery topics. She is currently affiliated with a facility in Quebec, Canada.

Part of the conference focused on refuting the ‘folklore’ of minimally-invasive procedures.   Some of these falsehoods have plagued minimally-invasive surgery since the beginning of VATS (in 1991), such as the belief that VATS should not be applied in oncology cases. The presenters also discussed how uniportal VATS actually provides improved visibility and spatial perception over traditional VATS (Bertolaccini et al. 2013).

However, Gonzalez-Rivas, Ugalde and the other surgeons in attendance presented a wealth of data, and publications to demonstrate:

–          VATS is safe and feasible for surgical resection in patients with cancer. (Like all surgeries, oncological principles like obtaining clear margins, and performing a thorough lymph node dissection need to be maintained).

–          Large surgeries like pneumonectomies and sleeve resections are reasonable and feasible to perform with single-port thoracoscopy.  Using these techniques may reduce morbidity, pain and length of stay in these patients.

–          Learning curve fallacies:  the learning curve varies with each individual surgeon – but in general, surgeons proficient in traditional VATS and younger surgeons (the “X box generation”) will readily adapt to single-port surgery.

–          Bleeding, even significant bleeding can be managed using single-port thoracoscopy.  Dr. Gonzalez Rivas gave a separate presentation using several operative videos to demonstrate methods of controlling bleeding during single-port surgery – since this is a common concern among surgeons hesitant to apply these advanced surgical techniques.

Dr. Gonzalez Rivas and the future of thoracic surgery

Upcoming conference in Florida – information about registering for September conference for hands-on course in single-port thoracoscopic surgery with Dr. Gonzalez-Rivas

Rocco, G. (2013). VATS and uniportal VATS: a glimpse into the future.  J. Thorac Dis. 2013 July 04.  After coming across several articles by Dr. Gaetano Rocco, and actively pursuing several other publications by this Italian thoracic surgeon, I have become increasingly convinced that Gaetano Rocco, along with Dr. Gonzalez Rivas is one of the world’s leading innovators in thoracic surgery.  Hopefully, cirugia de torax will be able to catch up to Dr. Rocco at some point for an in-depth discussion.

While I advance criticism of this event – it was a fantastic conference.  My only reservations were to the exclusivity of the event.  While this was certainly related to the costs of providing facilities and services for this event – hopefully, the next J & J thoracic event will be open to more interested individuals including young surgeons and nurses.